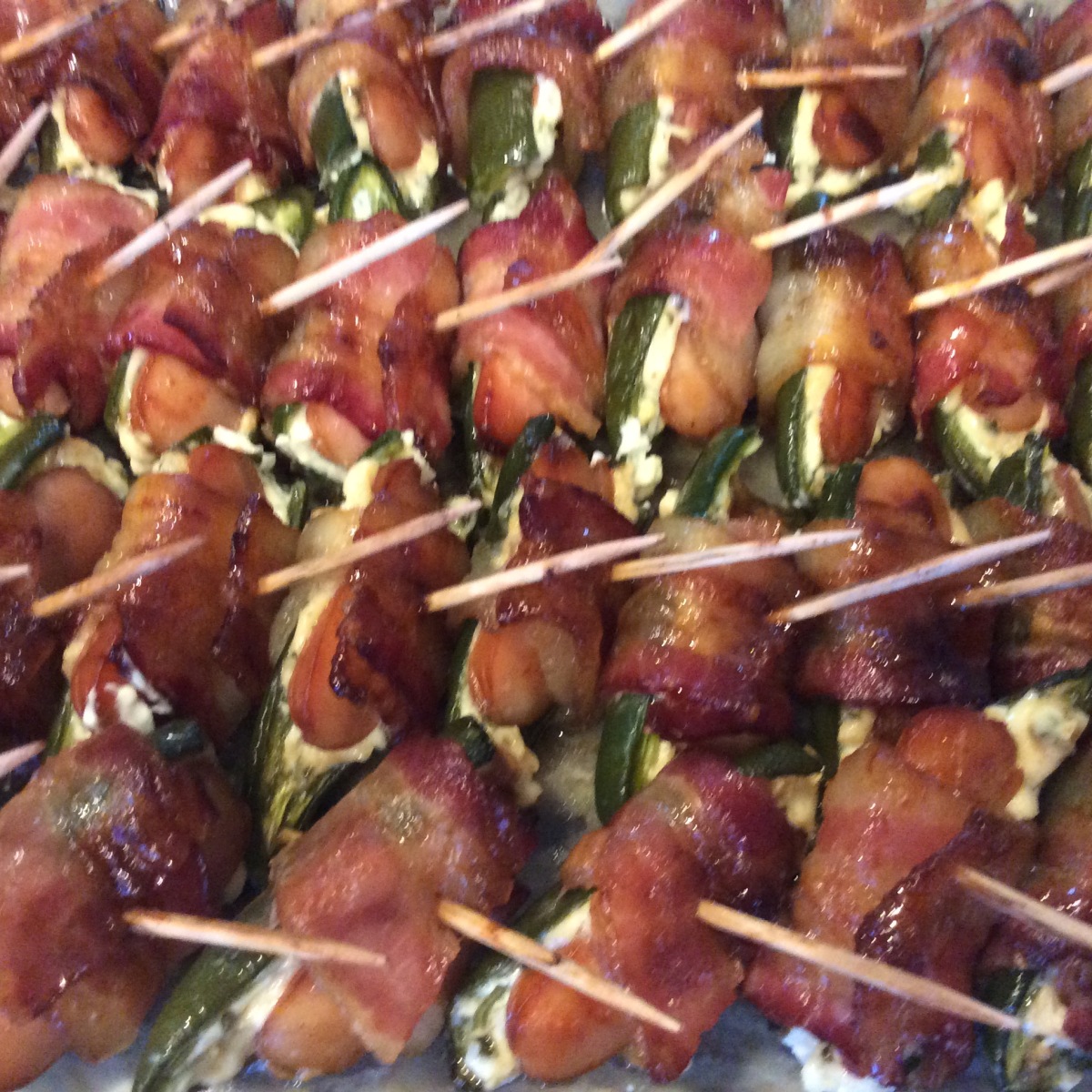 Posted on November 8, 2014 by Recipe Realities

Jalapeno Poppers….We have seen these yummy bites everywhere lately!  They all include the same basic ingredients…jalapenos and cheese among other typical ingredients like bacon.  You can find all kinds of recipes for poppers in cookbooks, online, or like I did, on Pinterest (my favorite recipe inspiration site!).  However, it isn’t until you put your personal spin on them and make them your own, do they truly satisfy that sinful taste that you are craving.  This is my jalapeno popper story….

If you have been reading this blog, you know that tailgating at the University of Tennessee Football games is one of our favorite things to do in the Fall.  That being said, I am always on the lookout for good tailgating recipes and I usually head to “Pinterest” to get some neat ideas.  It was 3 years ago and I had just discovered “Pinterest” earlier in the year and I already considered myself an addict!

While perusing through the many beautiful pictures of appetizer choices, I kept seeing several on jalapeno poppers.  My idea of these were what I had previously eaten in restaurants and they were usually fried, but these looked different. There was no breading and they were wrapped in bacon!  This would go well with my tailgaters!  I continued to look until I found several more pictures that even included sausages stuffed inside as well.  That decided it…jalapenos, cheese, sausage, bacon….this had to be a winner!

Since the weather was still very nice here in the south, my jalapenos were still going strong so I didn’t even have to purchase any.  I was pretty pleased with myself that I had found a recipe using some ingredients I already had on hand.  I set to work following the directions exactly and they turned out really good and were loved by everyone at the tailgate!  But, to me, the jalapeno to meat ratio was a little off.  There was so much meat that you could hardly taste jalapenos and they just needed a more of a flavor punch.  I knew I could make this recipe perfect and I am happy to say, I was triumphant!

Now, these poppers are my most requested appetizer and everyone wanted the recipe.  My daughter, Ashleigh, did NOT want me to share my secrets.  I had taught her how to make these and she was seeing the same “wow” reactions that I had so I would just share the basics when someone asked knowing they could find a similar recipe on Pinterest just as I had.  Last year, I was in Charlotte, North Carolina where my husband and I were planning on seeing BB King and as we were sipping on some wine, I went to post a picture of us on Facebook.  I noticed I had a private message.  To my astonishment (and amusement), it was a former boyfriend of Ashleigh’s requesting the popper recipe.  I might even say practically begging…ha, ha!  Since they had parted on great terms, I decided to help him out…..well, sort of!  I gave him the general ingredients as I had to all the others that had asked to satisfy his inquiry.  I kept my “little tweaks” to myself!  (Sorry, Scott!)

But as I near my goal of 10, 000 followers on my blog in one year (It looks like it might actually surpass that by the year mark), I decided it was time to give a gift back for all your support!  So here it is…..

First, as I mentioned, I thought there was too much meat which overpowered the jalapeno.  So I cut the sausages (aka smokies) in half before sautéing them.  Also, the recipe called for wrapping the poppers with half a slice of bacon which I just thought was too much so I cut the bacon into thirds, instead.  Finally, instead of regular full fat cream cheese, I used 1/3 less fat Philadelphia onion and chive cream cheese.  These changes made a huge difference and created the perfect jalapeno popper.

Note:  You will probably want to make at least two batches!

Preheat oven to 350 degrees (if baking right away).

First, a note on preparing your peppers…When you are seeding them, make sure to wear gloves!  Sometimes I even have to wear a little mask when I am using the jalapenos straight from the garden because the heat from the peppers actually makes me cough.

Notice, the size of those peppers in the picture above…they are the perfect size and if they come from your own garden, they typically will be.  However, the ones in the grocery store are usually quite a bit larger so I cut a bit of the top near the stem to make them just a little bit bigger than the cocktail sausage.  (I usually use the extra bits in other recipes.)  One word of caution…the jalapenos from your own garden are much hotter than the ones in the grocery so encourage your guests to take their first bite slowly…ha, ha!

Next, heat the olive oil in a saute pan and add the cocktail sausages.  Stir and cook until heated through and browned well.

Next, I lay my peppers out like as assembly line…

Next, comes the sausage…

And finally, the bacon…..

One helpful hint on the bacon…Pull it out from the refrigerator 10 minutes before slicing into thirds.  This helps “stretch” the bacon for the perfect fit around the stuffed pepper.

To make these ahead, simply put all the assembled peppers in a 9 x 13 pan, cover with foil, and keep in the refrigerator for up to days..

When you are ready to bake, place poppers on a large cookie sheet covered with foil..

The next step is VERY important….sprinkle the poppers liberally with brown sugar.  It won’t make them sweet but it actually it the key to get a carmelized, crisp crust on the bacon.

Pop into a 350 degree oven for 45 minutes, turning over halfway…

They are finally ready!

Ready to serve!  Be careful taking that first bite because they are extremely  hot coming right out of the oven.  (If you are taking them to a tailgate or a party, just cover them with foil and keep warm in an insulated carrier.)

Bottom Line:  This will be the hit at your next event…they are absolutely incredible!  I never seem to make enough!  In fact, earlier this month at the Tennessee-Alabama game, I made 3 batches and they only lasted 15 minutes!  My son, Jarrod, and Ashleigh’s beau, Hunter, just stood there and popped one after another into their mouths (yes. there was a lot of other food there)!  You may even want to hold off putting these out until your guests have sampled the other appetizers just to fill them up a bit!  Share your results and pictures with me and let me know what your fellow tailgaters think!

As to how they got their name, of course, the Tennessee Volunteer Mascot…Smokey, a Tennessee Blue Tick Hound!  The best appetizer named for the best mascot!

I am Chef Frankie and I love sharing recipes that will become favorites in your home…Until next time, “Love and Cook with Wild Abandon”!

Note:  To see more of my future recipe blogging plans, follow Recipe Realities  on Pinterest.  If you see one you like, let me know and I will make sure that one gets tested and blogged!