Every now and then you need a simple recipe…One that is not only delicious, but easy enough to make on a weeknight and even better, kid friendly!  As some of you know, I am not only a part-time personal chef for a local family but also a part-time nanny to their two adorable toddlers, Amelia (3 1/2) and Walker (2).

Needless to say, finding something that the whole family loves can be a challenge but last fall, I saw Ree Drummond, commonly known on the Food Network as the “Pioneer Woman”, create some savory chicken sandwiches on her Saturday morning show.  It included three ingredients all children love:  chicken, bacon, and cheese!  It was a must try and even better it was a HIT!

Now, the original recipe is just called “Ranch Chicken” but on her show she made it into sandwiches and they steamed in foil in a cooler while she delivered them to her husband and the ranch hands for lunch.  I did the same same process but on low heat in the oven.  (Note:  I halved the recipe to make 4 servings…it typically serves 8)

Hamburger Style Buns (if making the sandwich version of the recipe)

*My addition:  Ranch Dressing (enough to spread on the buns)
Canola Oil

To begin, make the marinade. In a large bowl mix together ½ cup Dijon or country/grainy mustard with ½ cup honey, juice of ½ lemon, ½ teaspoon paprika, and ½ teaspoon salt and whisk until smooth. Sprinkle in some crushed red pepper flakes or cayenne if you like things a little spicy. Set aside.

Next, rinse the chicken breasts, place between two sheets of waxed paper and pound to around ½ to ¾ inch thick with a mallet. (I got to skip this part since I was using chicken cutlets but definitely do this if you are using chicken breasts.)  Next, add the chicken to the bowl with the marinade, cover with plastic wrap and place in the refrigerator for 1 to 3 hours. (I just popped it into a gallon size storage back; why mess up an extra dish?)

While the chicken marinates, fry up some bacon. When finished cooking, reserve ¼ cup of the bacon grease and clean out the skillet. (Ree used a cast iron skillet on her show but I used my Le Crueset cast iron griddle.)

When the chicken is done marinating, preheat the oven to 400 degrees. Remove the chicken from the fridge and pour off excess marinade. Heat half of the reserved bacon grease with an equal quantity of Canola Oil in the clean skillet over medium-high heat. When the grease is nice and hot add two or three pieces of chicken to it. Cook until brownish/blackish, about 1 to 1 ½ minutes per side.

Remove from oven.  Lay a few pieces of bacon over each chicken breast. Sprinkle shredded sharp cheddar cheese over the top of the chicken as generously as you like. Return pan to oven for an additional five minutes until cheese is melted and bacon is sizzling.

Spread Ranch dressing on both sides of buns, place chicken on top, and wrap in foil.  Steam in a 175 degree oven for about 10-15 minutes and enjoy! 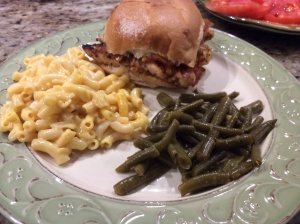 Bottom Line:  This is a really great, no frills recipe which could be perfect done as sliders and packed into a cooler for fall tailgate parties.  The kids love it and it is very enjoyable for the adults as well.  One variation I did another time I made this dish was to use a tangy red sauce (such as Tom’s marinade) instead of the marinade and that was quite delicious as well.  We have also used pepper jack cheese as well; it all seem to work…but how can you go wrong with bacon?!