Mario Batali’s Pork Chops with Peppers and Capers….Worth a Try in Your Kitchen? 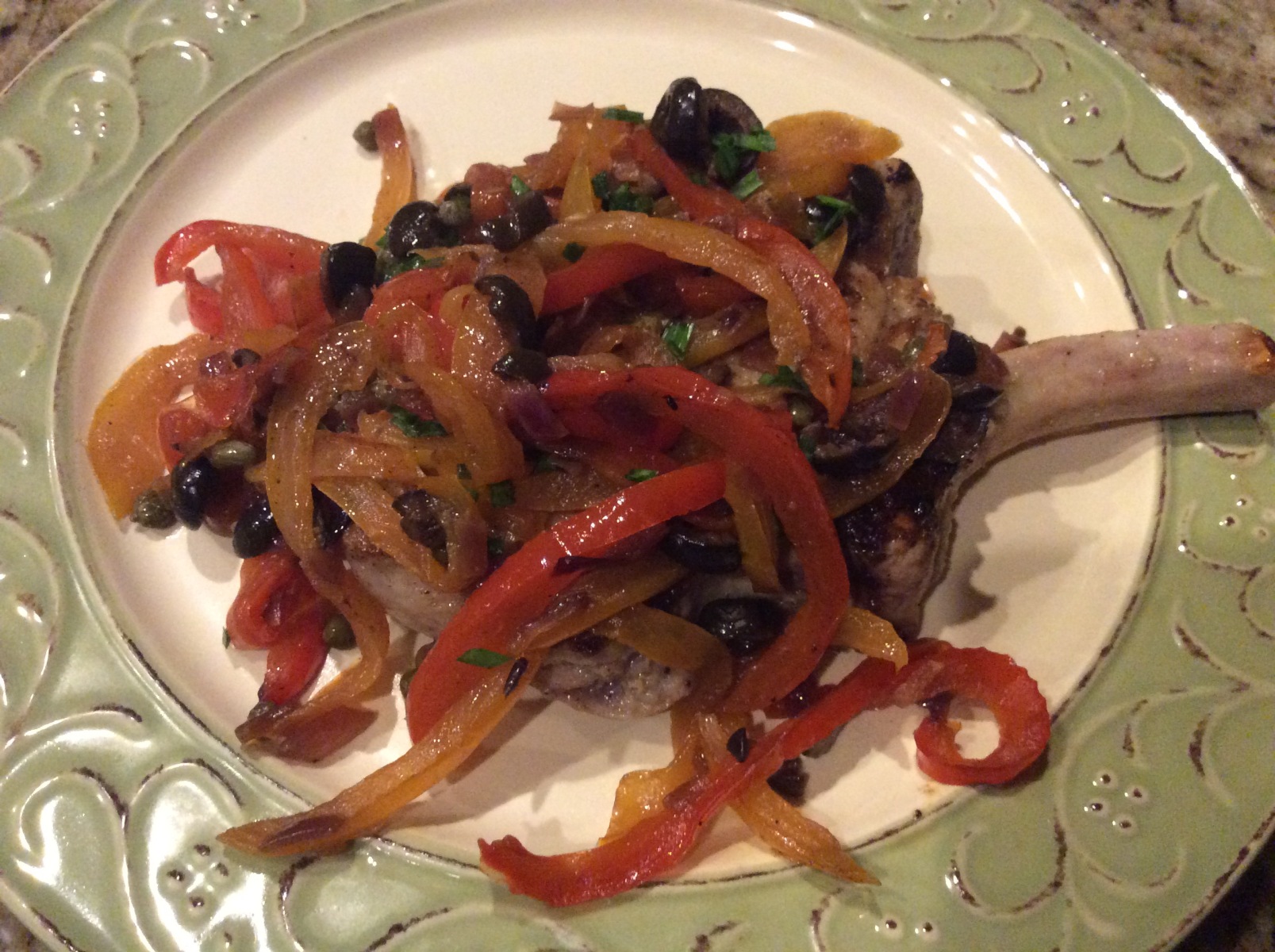 As I have mentioned numerous times, one of my favorite cooking shows is The Chew on ABC.  I love the way the co-hosts seem so relaxed while cooking in front of a live audience all along sharing personal tips and insights.  It really is unlike any other show.  Recently, I blogged on a pork chop recipe by Serious Eats which involved an overnight dry rub (delicious results).  You can check that out by following this link:

If you ever watch The Chew, you know that Michael Symon and Mario Batali differ greatly on the debate of using a dry rub or brining pork and poultry.  So, since I had recently tried a dry rub method, it was time to try Batali’s brining method in his recipe for Pork Chops with Peppers and Capers.

I’m no newbie when it comes to brining.  In fact, I brine my Southern Fried Chicken overnight before preparing it and it turns out perfectly every time! (I promise to share soon!)  However, this brine is a little different since it uses both salt AND sugar where mine typically just uses salt.

I have learned over time that you truly must read your recipe all the way through before beginning your grocery shopping much less your prep and this case was no exception.  First, the recipe serves 6 and I was only feeding 2 so my version is a little smaller.  I also thought that even serving 6, that was A LOT of peppers and onions so I reduced that a little more.

The brine seemed so much to me even cut down for 2 servings but I went with it exactly as written.  Batali used a cast iron skillet on the show but I decided I wanted to do this in all one pan so I used one of my favorite pans…My Le Crueset Braising Pan.  (It will be featured in “A Few of My Favorite Things” coming soon!)  I knew the Braising Pan would be more successful for my vegetables and since this pan was made out of enameled cast iron, I felt like I could get a good sear on my chops.

Now, my purpose in recreating this recipe was two-fold…One, my husband LOVES pork chops and Two, we had a bit of a stressful week so I wanted a relaxing and romantic evening.  To make this dinner even more special, I decided to go to one of my favorite markets in Knoxville…Butler and Bailey Market.

On the outside this place doesn’t look like much but on the inside it is a hidden gem!  They use local meats and produce and restaurants all across Knoxville get much of their meat directly from them.  I went there looking for one thing….Frenched Cut Pork Chops!  They would definitely take this special dinner up a notch! 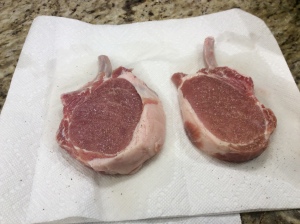 So, this is my version of Mario’s dish…..

In a small saucepan, combine 2 cups of the water, the kosher salt, brown sugar, peppercorns, and bay leaves and bring to a boil over high heat, stirring to dissolve the salt and sugar. Pour into a large pot or other container and add the remaining water. Stir to mix well, cool, add the pork chops, cover, and refrigerate 1 to 6 hours.  (Interesing note, here…the recipe on the website said that you could brine them up to 12 hours but Batali said on the show no more than 6 hours or they would become pickled.  I brined mine for approximately 3 hours.)

Drain the chops and pat dry with paper towels. Season the pork on both sides with salt and pepper.  Brush each side of the chops with olive oil.  Set aside while preparing vegetables.

In a heavy skillet, heat 2 tablespoons of the Olive Oil over high heat until smoking.  Add the Bell Peppers, Onions, Olives, and Red Pepper Flakes and cook, without stirring, for about 5 minutes or until the Peppers and Onions are slightly charred.  Stir a couple of times and then cook for 5 minutes more.

Add the Wine and Capers and bring to a boil.   Reduce the heat to maintain a simmer and cook for 10 minutes.  Top with the scallions (The scallions were added at the end of Batali’s dish but I wanted them cooked a bit…either way will work just fine!)

Remove from the heat; set aside.  Deglaze the pan with 1 tablespoon of wine, scraping up the bits.

Heat the skillet over medium-high heat.  Add in 1-2 Tablespoons of olive oil and place the chops into the skillet and cook, without moving them, for 6 minutes.

Turn the Chops over and cook for 5 minutes more or until they register 135°F on a meat thermometer.

Bottom Line:  My chop was cooked perfectly (although a little on the salty side) and the vegetables were a wonderful compliment.  Jeff preferred his chop a little more rare so if you have a strange one like I do living in your house, just remove that chop a little earlier.  I will definitely make this again but I don’t think it was necessary to add the additional salt after removing the chops from the brine.  Omit, that step and you have a very nice dish.  Use Frenched Cut Pork Chops and you will impress anyone you serve!  I am Chef Frankie and until next time…”Keep on Cooking!”

For the original link to the recipe I viewed, visit:  http://abc.go.com/shows/the-chew/recipes/pork-chops-with-peppers-and-capers-mario-batali-america-farm-to-table

Note:  If you just do a google search for the recipe, you will find several different variations including one that dredges the chops in flour.  This, however, is the link to this week’s show.  🙂